“I want to hear that music every day of my life”

“The oldest, most exclusive dance party in the world” 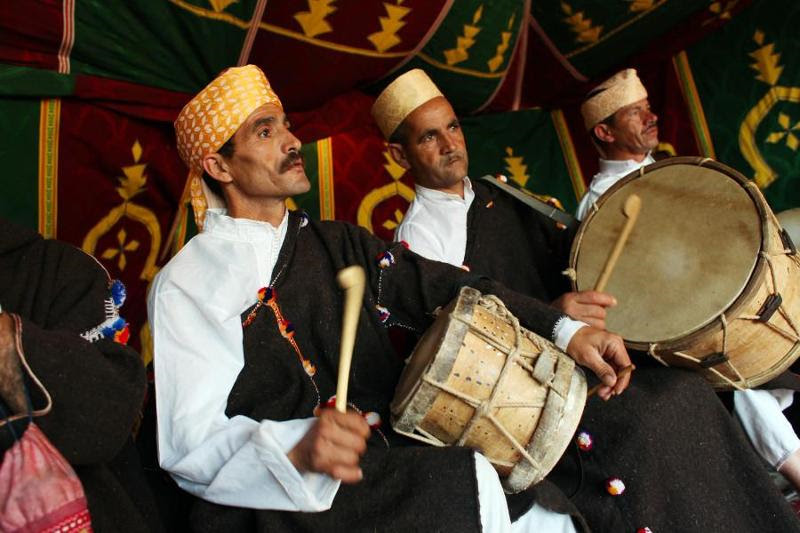 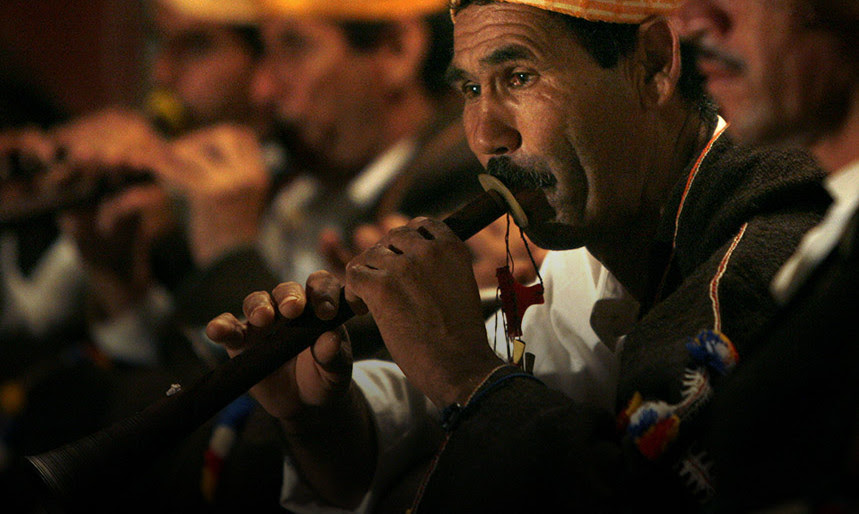 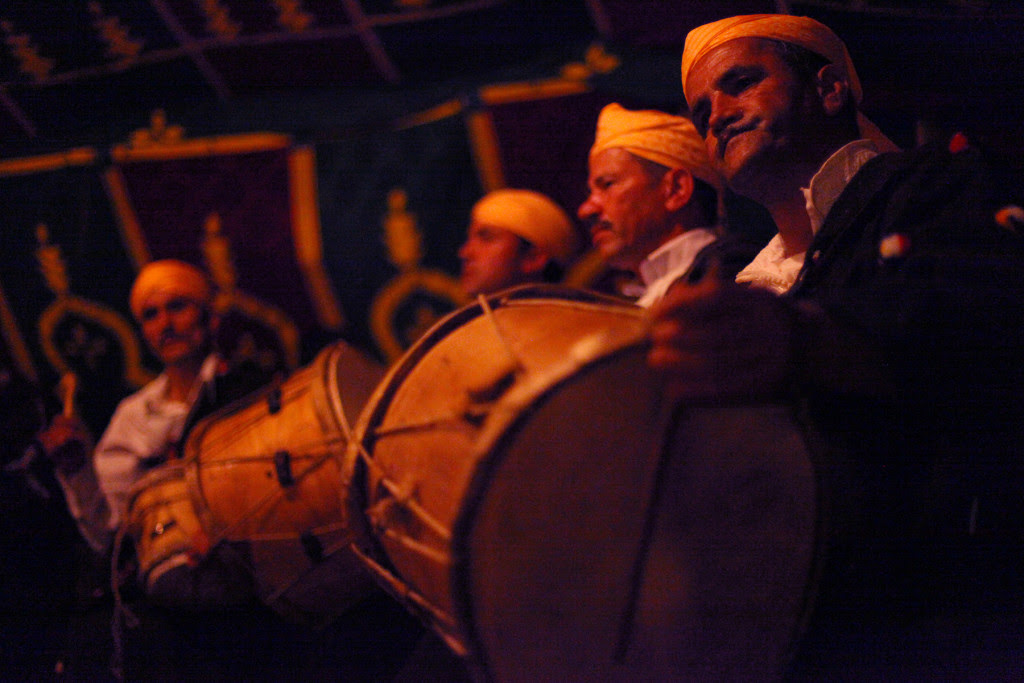 The Master Musicians of Joujouka are Sufi trance musicians from a tiny village in the Southern Rif Mountains. They play a form of trance music which is used for healing. Each year in the village, a boy is sewn into goat skins to dance as Boujeloud, who appears to Westerners as Pan. The flute-playing goat god is the protector of shepherd boys who brings fertility in springtime. The musicians play ancient music to drive Boujeloud back to his cave. With the beast appeased by their music, they can expect a good harvest. Women touched by his flailing palm fronds will bear healthy children.

The remarkable music played by the Master Musicians of Joujouka, a remote village in the Ahl Srif tribal area south of the Rif in Northern Morocco, is thousands of years old. In the 15th century, when the Sufi saint Sidi Ahmed Schiech arrived in the village, he wrote music for the Masters’ ancestors which could heal disturbed minds. Today’s Masters are blessed with the Baraka or spirit of their saint and use touch and prayer to heal.

The Masters’ performances feature a dancer dressed as Bou Jeloud, a Pan-like figure half goat half man. Although the character of Bou Jeloud is found all over Morocco, it takes on different form in Joujouka. In Joujouka, Bou Jeloud gave an Attar ancestor the gift of flute music and bestowed fertility on the village every spring when he danced. The music relating to this is the Masters at their most mind-blowingly powerful.

The Masters, Beats and Hippies

In 1951, the American writer Paul Bowles and the Canadian painter Brion Gysin travelled to a Sufi music festival in Sidi Kacem, a couple of hours from where they were living in Tangier. When he heard the Masters, Gysin said he wanted to listen to their music every day of his life. In Tangier, he met Mohamed Hamri, a would-be painter from Joujouka. When Hamri took Gysin to Joujouka, Gysin discovered to his astonishment that the music he’d fallen in love with was played by Hamri’s uncles. Gysin and Hamri opened a restaurant in Tangier called The 1001 Nights and members of the Masters became the house band. It was here that legendary Beat figure William Burroughs first heard the music.

In the late 1950s Gysin and Burroughs lived in the Beat Hotel at 9 rue Git le Couer, Paris. Here Gysin invented the Cut-Up Method of writing and the Dreamachine with Ian Somerville and worked with Burroughs, Somerville and filmmaker Antony Balch in Cut Up film experiments to a soundtrack of the Masters Musicians made by Gysin. When the Rolling Stones were in Tangier in 1967, Hamri and Gysin met them and Hamri formed a bond with Brian Jones. Brian went to Joujouka, where he, too, fell in love with the Masters’ music, although he said ‘I don’t know if I possess the stamina to endure the incredible, constant strain of the festival’. He returned in 1968 to record the Masters. Before he died in 1969, Brian had prepared the cover, and edited and produced the album of recordings he made of the Masters. Brian Jones Presents the Pipes of Pan at Joujouka was released in 1971, honouring Brian’s memory and exposing a wider audience to the remarkable music of the Masters for the first time.

In January 1973, jazz musician Ornette Coleman recorded with the Masters. A small part of what was recorded was released on the 1975 album Dancing In My Head album. Also in 1975, Hamri’s book Tales of Joujouka was published. Thanks to Rikki Stein, the Masters played at Worthy Farm, the site of Glastonbury, for the first time in 1980 as part of a three-month tour which included a week’s residency at London’s Commonwealth Institute.

After many years painting in LA, Hamri returned to Joujouka and found discord in the village. He built a new house there which became a gathering place for many of the old Masters and their apprentices. He took a large group to Italy in 1991 and in 1992 both he and the Masters took part in the Here to Go Show in Dublin, documented in the DVD Destroy all rational Thought.

In Dublin, the Masters met Frank Rynne, their current manager. Frank spent two months with Hamri in Joujouka in 1994 recording the classic CD Joujouka Black Eyes for Sub Rosa. Since then, he’s recorded Sufi: Moroccan Trance and Boujeloud. In 1998 Hamri and Masters’ drummer El Khalil Radi took part in the Festimad Poetica festival in Madrid with Lydia Lunch, Richard Hell, John Giorno, Tav Falco and John Cale. The Masters were also featured on the CD 10% File Under Burroughs, released 1998. In 2012 they appeared on the latest Rough Guide to the Music of Morocco.

The 40th Anniversary of Pipes of Pan

In 2008 the Masters honoured the 40th Anniversary of Brian Jones’s influential recording with a festival at Joujouka. Anita Pallenberg and John Dunbar were among the people who made the pilgrimage to the village. Joujouka by Daragh McCarthy, a film of the 2008 Brian Jones Festival premiered in London in 2012 and will be released in 2013.

2011 saw the Masters on the Pyramid stage at Glastonbury, opening the Festival.

Since 2008, the annual festival at Joujouka has taken place in June every summer and offers a unique opportunity to spend three days with the Master Musicians. Unlike any other, ours is a true micro-festival which has received rave coverage from Mojo, The Guardian, Liberation, the BBC, Al Jazeera and The Irish Times.

The Festival is all about offering a very small group of people the opportunity to live in Joujouka with the Masters as your hosts and experience the music in the village and spectacular landscape in which it belongs. People who speak French, Arabic and English and who have long, strong connections with the village are on hand to answer questions and make you feel as at home as possible. Because of the nature of the Festival, numbers have to be strictly limited to 50 people and this means it’s essential to book early if you want to have this incredible experience.

If you’re only coming to Morocco for the Festival, the easiest thing to do is to fly to Tanger and take the train from Tanger Ville, a short taxi ride from the centre of Tanger. A taxi from Tanger to Joujouka costs 100 MAD. Should you be travelling in Morocco, Fez and Casablanca are four hours from El Ksar El Kebir, the nearest town to Joujouka, by train. Marrakesh is eight hours. Don’t fly to Agadir – there are no direct train connections.

We collect you at El Ksar El Kebir train station and return you when the festival is over. The station is around an hour from Joujouka. The Moroccan train service is actually pretty good and very cheap. You can find train times at www.oncf.ma, the website of the national rail network.

How long is the festival?

Due to high demand, we only offer three-day tickets for the full festival but if you really want to experience Joujouka and can only come for a shorter period of time, contact us and we’ll see what we can do.

What the ticket price includes

The Masters play for you and the village every night of the Festival on the stage which was purpose built for them and they spend most of the days playing. Music is part of the fabric of Joujouka and the essence of your experience. Your ticket includes transport from the railway station, three nights’ accommodation in the Masters’ homes, all your meals and drinks for the three days of the festival and breakfast on the day you leave. Alcohol is strictly prohibited. All accommodation arrangements will be made for you well before you arrive in Joujouka and, don’t worry, you won’t be sharing a room with strangers. One of the great treats of the Festival is the opportunity to enjoy home cooked Moroccan food, which is delicious. If you’re a vegetarian or vegan, no problem. Your hosts will often prepare snacks, which are meals in themselves.

Inside the Oldest, Most Exclusive Dance Party in the World

After two years of absence and a small offering this year, The Master Musicians of Joujouka annual Festival is back in 2023 with a limited number of 50 places.

The festival begins on Friday, 2nd June  2023 with pick up at the nearest city of Ksar El Kebir around noon and by arrangement drop-off on the morning of Monday, 5th June back to the train station at Ksar El Kebir.

Ticket price is 485 Euro which includes pick up at Ksar El Kebir, accommodation, three meals a day and drop-off on 5th June.

Also included is three days and nights of music and a full immersion into the Joujouka experience.

Guests stay with Master Musicians and their families.

Performances are held at the Madrassa of the Master Musician of Joujouka in their village.

END_OF_DOCUMENT_TOKEN_TO_BE_REPLACED

A selection of photos of the Master Musicians of Joujouka performing in their home village and around the world.