The Master Musicians of Joujouka paid tribute to Brian Jones, on the 50th anniversary of his visit to their village in 1968, with their annual festival in Joujouka and a series of events in Marrakech, including a concert for Atlas Electronic.

Using a portable Uher two-track tape recorder Jones made recordings during his visit to Joujouka that where mixed by Jones on his return to London for what became the album Brian Jones Presents The Pipes Of Pan At Joujouka, released after his death in 1971 on Rolling Stones Records.

In his liner notes for the LP Jones said: “I don’t know if I have the stamina to endure the incredible constant strain of the festival.”

The Master Musicians of Joujouka performed a four-hour set at Villa Janna in Marrakech on 30th June 2018, with live visuals by Joachim Montessuis, that featured footage and images of the Master Musicians and Brian Jones to commemorate the 50 years since his visit.

Current leader of the Master Musicians of Joujouka, Ahmed El Attar said: “I was 12-years-old learning drumming with my father and the Mallimin (Masters) when Brian Jones came. Brian Jones was very good. My father played rhaita with and for him and I danced and played my drum. He came with Hamri and Gysin. He had long hair and he rubbed my head. He brought a lot to Joujouka.” 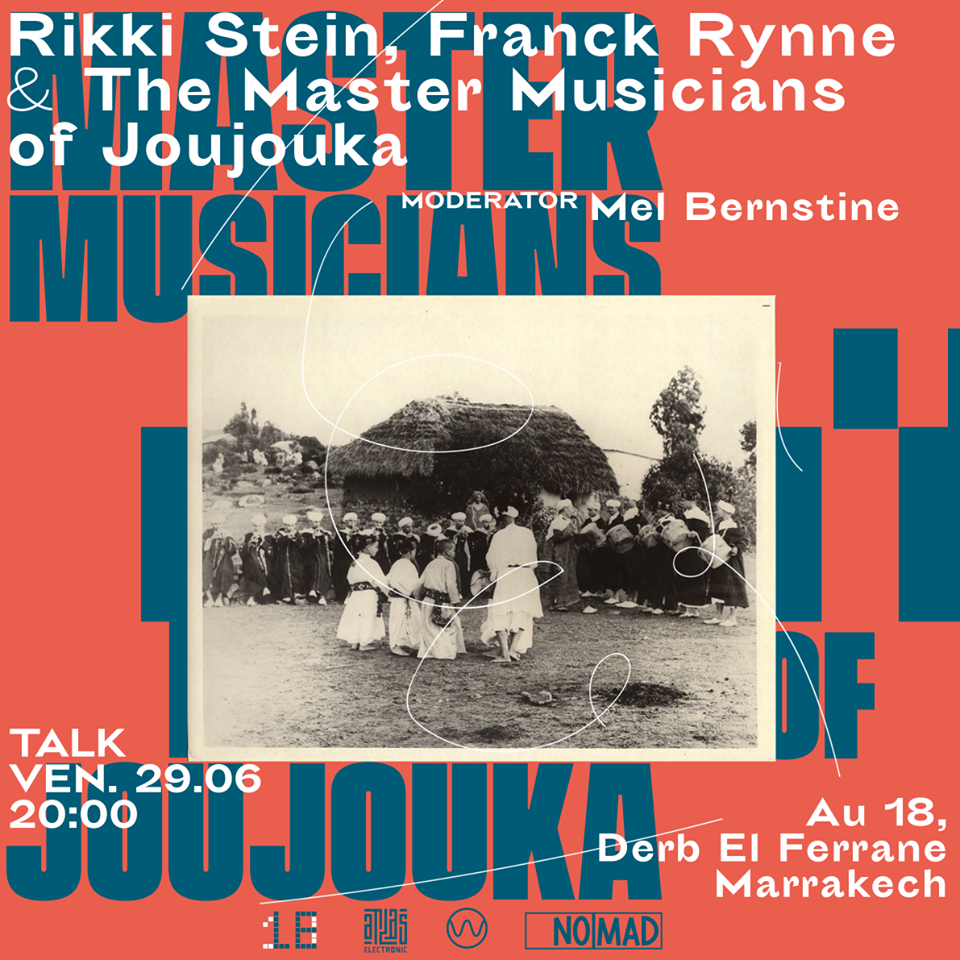 The Master Musicians of Joujouka would like to thank everyone who attended this year’s sold out festival dates in the village (22-24 June).

Several events are planned in Marrakech this weekend to coincide with the concert on Saturday, 30th June at Villa Janna promoted by Atlas Electronic. 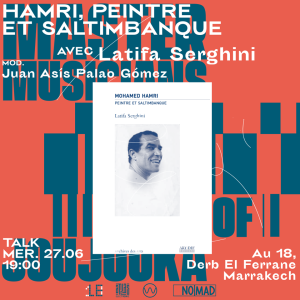 On Wednesday, 27th June author Latifa Serghini held a book signing for her recently published book Mohamed Hamri: Peintre Et Saltimbanque a biography of Hamri, the painter and poet who introduced the music of the Master Musicians of Joujouka to the world, at the 18, Derb El Ferrane gallery in the city. 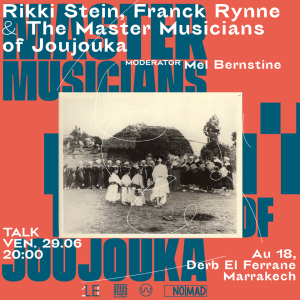 On Friday, 29th June at 18, Derb El Ferrane from 7pm Mel Bernstine hosts a discussion with the Master Musicians of Joujouka, their manager/producer Frank Rynne and Rikki Stein.

Rynne has worked with the Master Musicians Of Joujouka since 1992 when he brought the group to Dublin for the William S. Burroughs and Brion Gysin art exhibition, the Here To Go Show. He has managed the group since 1994 and produced the albums Joujouka Black Eyes, Moroccan Trance II: Sufi, Boujeloud and the upcoming LP Live In Paris.

Stein lived in Joujouka from 1970 and managed the group for their 1980 three-month tour of Europe. He has continued to work with the Master Musicians and made his first visit to the village in 38 years ahead of the concert in Marrakech. More details on the event page here 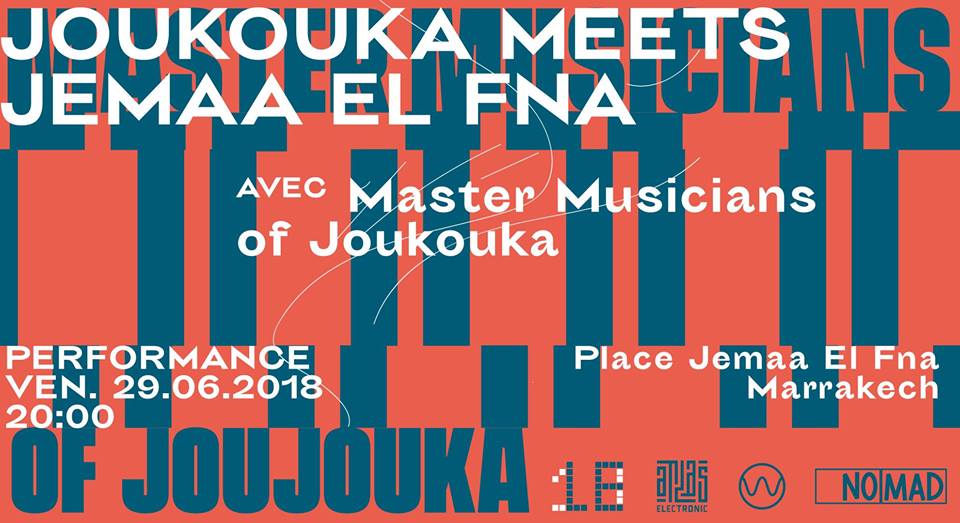 Following the talk the Master Musicians of Joujouka will perform a live set in the Djemaa El Fna at 9pm. More details here

The Master Musicians of Joujouka will then perform a headline show – their first in the city in decades at the Villa Janna eco village, in the Palmerie district of the ancient city in an 800-capacity amphitheatre.

The Masters Musicians of Joujouka will play a 4-hour rhaita set and perform Boujeloud with live visuals by Joachim Montessuis.

In partnership with Atlas Electronic, LE 18 is setting up a series of meetings and interventions that will enrich the exceptional concert of the Master Musicians of Joujouka which will take place on June 30 at Villa Janna.

The MMOJ troupe will give a performance on the Jamaa L’fna square. The opportunity to meet this legendary group, described by William S. Burroughs as a “4,000 year old rock band”. The square will vibrate to the hypnotic and transcendental rhythm of the Jbala ghaita.

Marrakech international airport is served by multiple international carriers and Marrakech is accessible by train from major Moroccan cities Fez, Casablanca, Rabat and Tangier with bus links from Essaouira and Agadir.

Full details of all Master Musicians Of Joujouka events in Marrakech via Atlas Electronic:

Dates and tickets for next year’s Master Musicians of Joujouka festival to be announced soon. Keep checking back to joujouka.org for details.

For the first time in decades the Master Musicians of Joujouka will headline their own concert in Marrakesh on Saturday, 30th June 2018.

The Masters Musicians Of Joujouka will play a 4-hour rhaita set and perform Boujeloud with live visuals by Joachim Montessuis.

The venue is an 800 seat open air amphitheatre in the beautiful setting of the Villa Janna eco village, in the Palmerie district of the ancient city.

Amid the rolling hills of Northern Morocco, a secluded village is home to the original music and current members of the Master Musicians Of Joujouka. It is here in Joujouka, that the Attar family preserves one of the oldest known musical traditions on the planet.

In the late 60’s Brian Jones, from The Rolling Stones, visited and consequently paid tribute to the sounds he encountered in Joujouka. In 1968 he recorded an album with The Masters called ‘Brian Jones presents the Pipes of Pan at Jajouka’ exposing a wider audience to the enchanting music for the first time. This year marks the 50 year anniversary of this visionary moment of cross-cultural collaboration.

On Saturday the 30th of June, to celebrate this iconic anniversary and pay homage to the ancient sounds of Morocco, we are honoured to present MMOJ at our festival site, Villa Janna for an exclusive 4-hour live concert in the compelling amphitheatre.

Marrakesh international airport is served by multiple international carriers and Marrakesh is accessible by train from major Moroccan cities Fez, Casablanca, Rabat and Tangier with bus links from Essaouira and Agadir.